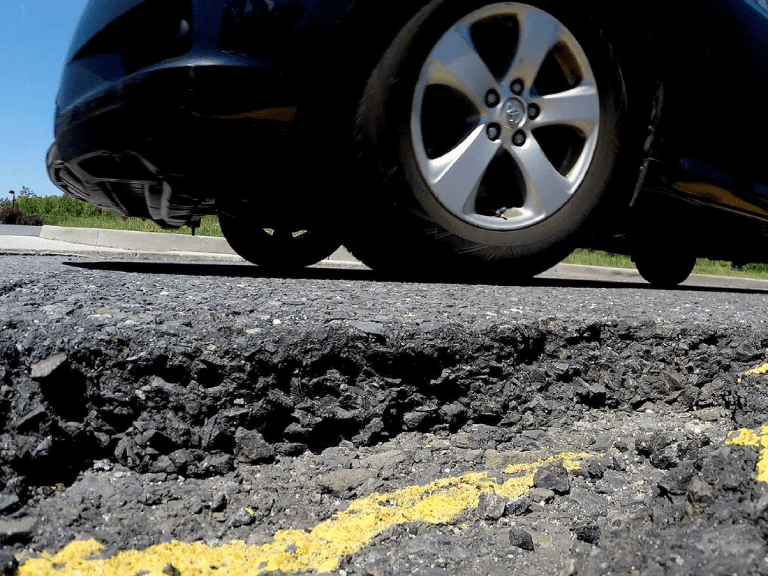 Dallas and the rest of North Texas is no stranger to new and existing road construction. However many areas of North Dallas and surrounding cities are filled with roads that are not exactly the easiest on the wear and tear of your vehicle, especially to fenders, bumpers and body damage to your vehicle. When driving there are situations that sometimes can’t be avoided with road conditions like serious potholes leading to scratches, or even loss of body parts from your car. So who is responsible for damage to your vehicle from road conditions and potholes?

The Texas state government is tasked with keeping roads clear of debris, free of potholes, and safe to drive on. Yet when cities are in trouble, one budget often compromised is the DOT (department of transportation). If your vehicle is damaged because of a pothole in Dallas, Texas, are you stuck with the bill for damage or should the city be responsible?

Texas law dictates that its cities are not responsible for damage caused against a vehicle due to street debris or potholes. The city is not liable for the condition of its roads, nor is it likely that filed claims will be met.

Despite this law, there is a formal process on the Texas Department of Transportation’s website. The form reports where the pothole is, and you can request a direct response from the TxDOT. Citizens may make a claim against the city seeking reimbursement. Sometimes the city reimburses drivers, though the chances are extremely slim. Motorists requesting refunds for pothole damage is the number one complaint.

In other words, cities are left up to their own discretion on whether or not to pay damages. While the laws vary from city to city, one trend strikes through all Texas court systems: requesting damages is a lengthy process that almost never bears fruit.

The city of Dallas, for instance, is notorious for only paying out money if the damage includes examples of clear negligence on the part of city employees.

If you wish to bring a lawsuit against your city for damages, there are generally three important questions that must be answered:

Most of the time, the city must be aware of an unsafe section of road before it is held liable. This is especially true in Texas. If you are the first to report a pothole, the city is unlikely to pay anything.

Then, the city must have a certain number of business days to determine whether it is liable. This is typically left up to the discretion of the judge, who will often side with the city if the claim is made by a civilian.

If your vehicle has received body, frame or accessory damage from Dallas Potholes or road conditions, call Texas Body Works and see how we can help! Contact us now to for a FREE ESTIMATE!